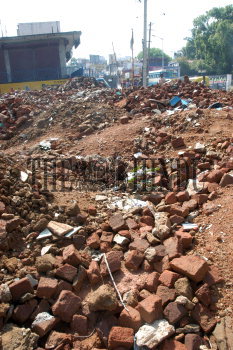 DEBRIS PILING UP IN THE CITY! AS BANGALORE, ONE OF

Caption : Debris piling up in the city, As Bangalore, one of the fastest growing city in the world facing the problem for dumping garbage and constructiion debris, tonnes of debris is been dumped on the pavements and drainages, though BMP's watch full SWORD team go round night watch and punishing the culprits. The picture taken at Magadi road in Bangalore on May 10, 2006. Photo: K. Gopinathan.