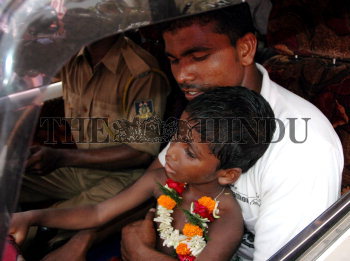 Caption : An escort taking the four-and-a-half-year-old Budhia Singh to CRPF hospital for treatment after he fell sick after finishing the 65 km distance in 7.02 hours in Bhubaneswar on May 02, 2006. Budhia, who started from the Puri Jagannath temple at 4 a.m., reached the Orissa State capital a few minutes after 11 a.m. He was supposed to cover a distance of 70 km, but he became sick after covering 65 km. A team of 300 CRPF cadets ran in groups alongside the child, who covered the distance at nearly 10 km an hour. Budhia Singh's name would figure in the Limca Book of Records in the 2007 edition. Photo: Ashoke Chakrabarty