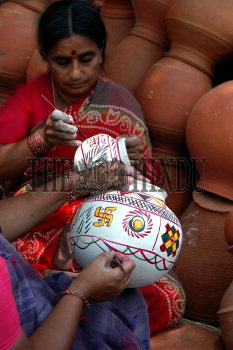 Caption : Women painting pots with colourful motifs which are traditionally used during festivals and special occasions, in Hyderabad on May 03, 2006.The President of Asian Develpment Bank, Haruhiko Kuroda,contended that the major challenge in Asia was to bridge the widening gap between the rich and poor. The Asian Development Bank is holding its 39th Annual general body meeting on expanding free trade in a region which is home to two-thirds of the world's poor. Photo: Mohammed Yousuf