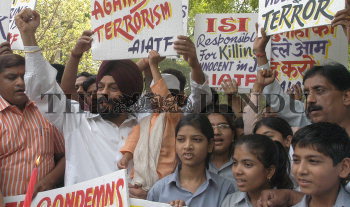 Caption : Activists of All India Anti-Terrorist Front (AIATF) holding a demonstration against the killing of Suryanarayna, who was kidnapped and later killed by the Talibans in Kandahar, in New Delhi on May 02, 2006. Photo: Ramesh Sharma