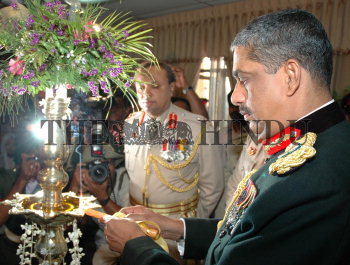 Caption : This December 6, 2005 file photo shows Lieutenant General Sarath Fonseka (right) lighting the traditional lamp after he was appointed the Commander of the Army of Sri Lanka at the military headquarters in Colombo, Sri Lanka. A suicide bomber blew herself up inside Sri Lanka's army headquarters on April 25, 2006 killing at least six people and seriously wounding Fonseka, who is undergoing surgery and is in critical condition. Photo: Sriyantha Walpola