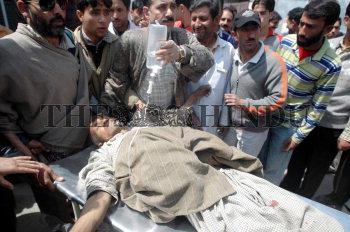 Caption : Paramedic rushes a WOUNDED civilian for treatment after a grenade blast at a local hospital in Srinagar, on April 24, 2006. Four people including one policeman are WOUNDED when suspected militants hurled a grenade outside a polling booth, in Palhallan Pattan, some 27 kilometres from Srinagar. Photo: Nissar Ahmad