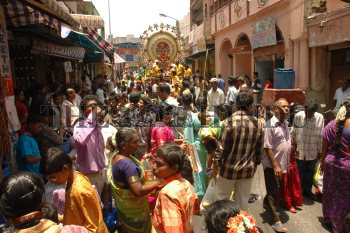 Caption : People Gathered around the chariots carring god from variuos temple in and around Ulsoor area as part of "Poo-Pallakhu" during the Ulsoor Someswara Car Festival, in Bangalore on April 23, 2006. The Chariots goes round all the roads in Ulsoor from last mid-night, with people offering prayers in front of their houses, one of the even which is ben happening since good old Histrocial days. Photo: K Murali Kumar