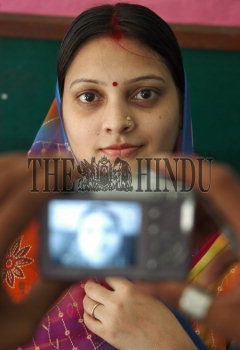 Caption : A cameraman is taking picture of a woman voter at a polling booth to extend her a voter identity card in Howrah city, Kolkata on April 22, 2006. The voters who could not avail voter identity card but were enlisted in the voters list, were allowed to cast their vote. The Election Commission has taken the initiative to take their pictures with a digital camera for issuing a new voter identity card later. The second phase of polling was conducted in West Bengal today. Photo: A. Roy Chowdhury