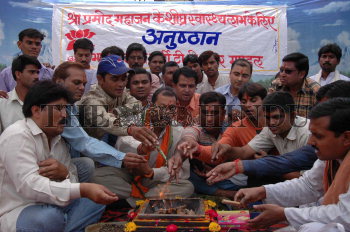 Caption : BJP workers performing yagna 'Anushthan' at Hanuman Mandir in Bhopal on April 22, 2006 for the quick heal and long lives of senior BJP leader Pramod Mahajan, who was shot at his residence in Mumbai by his younger brother Pravin Mahajan on April 22, 2006. Photo: A.M.Faruqui