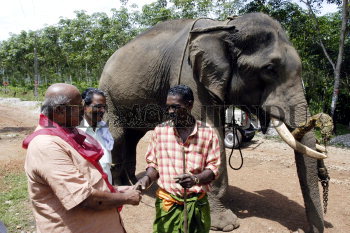 Caption : Revolutionary Socialist Party (RSP) Kerala State secretary T.J. Chandrachoodan soliciting votes from a mahout in the dust tracks of Aryanad constituency during the election campaign on the suburbs of the Kerala capital Thiruvananthapuram on April 18, 2006. Photo: C. Ratheesh Kumar