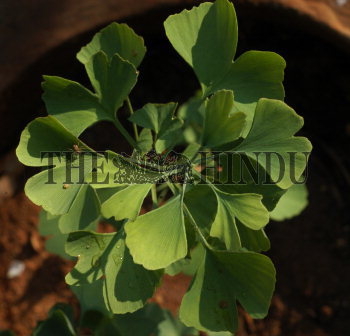 Caption : Ginkgo biloba, a rare plant species also called a living fossil, belonging to the age of dinosaurs that has several medicinal properties, exists at the Bio-diversity Park developed at a waste land on the premises of RCD Government Hospital in Visakhapatnam that is nurtured by the Dolphin Nature Conservation Society, a student community. The park houses around 1200 rare plant species which attract many insects. Photo: K.R. Deepak. (18/04/2006).