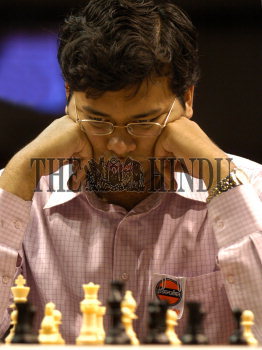 Caption : GM Surya Sekhar Ganguly pondering his next move in the 18th round game against B.S. Shivanandan (not in pic) in the 43rd National 'A' men's chess championship at the Swarna Bharathi Indoor Stadium in Visakhapatnam on April 16, 2006. Photo: K.R. Deepak