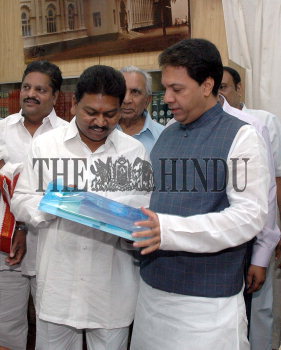 Caption : Speaker of the Andhra Pradesh Legislative Assembly, K.R. Suresh Reddy (right), handing over the rules and procedures of the House to the newly sworn in legislator, P. Rajanna Dora, in Hyderabad on April 16, 2006. Rajanna Dora of the Congress who had lost to Rajendra Pratap Bhanj Deo of TDP from Salur (ST) constituency in Vizianagaram in the 2004 Assembly elections by a margin of 2,493 votes, had filed an election petition in the High Court in June 2004 alleging that Bhanj Deo had wrongfully claimed himself to be a Konda Dora tribal when, in fact, he was a Kshatriya. After persuing the evidence of both sides, Justice Seshasayana Reddy, concluded that Mr. Bhanj Deo did not belong to any of the tribes mentioned in the Constitution of India. Therefore the election of Bhanj Deo was set aside by the High Court on March 10 and it was declared that P. Rajanna Dora would be the MLA but the judge suspended the operation of the judgement till April 7. Photo: P.V. Sivakumar