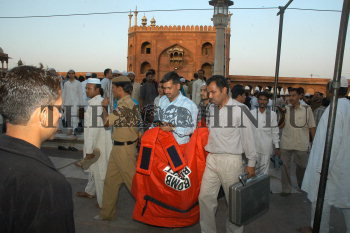 Caption : Bomb disposal squad personnel checking at the blast site inside the Jama Masjid, in New Delhi, on April 14, 2006, after twin blasts struck India''s largest mosque. Fourteen persons including a woman and a girl, were injured in the explosion, which occurred soon after the evening prayers. Photo: Shanker Chakravarty