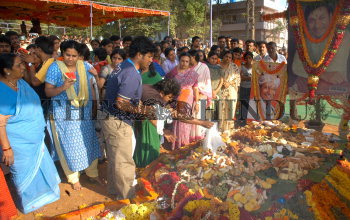 Caption : Parvathamma Rajkumar (ext left) along with her family members watching as her sons Shivraj Kumar and Puneeth Rajkumar perform the RITUALS at the site where her husband actor Rajkumar's body was burried at Kanteerava Studios, in Bangalore on April 14, 2006. Dr. Rajkumar who passed away in Bangalore on April 12 following a cardiac arrest. His mortal remains were buried with State honours at Kanteerava Studios on April 13. Photo: K. Bhagya Prakash