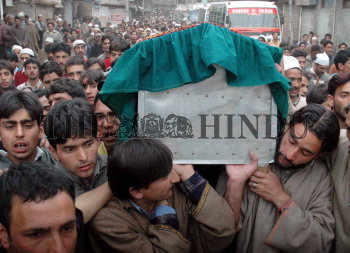 Caption : People carrying the coffin of Javed Ahmad Bhat, who was killed in a grenade attack, in Dal Gate area of Srinagar, on April 14, 2006. Five civilians killed and two BSF soldiers were among dozens of civilians injured in the eight serial grenade attacks. Photo: Nissar Ahmad