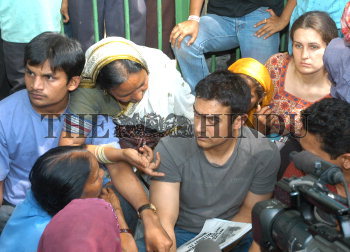 Caption : Film actor Amir Khan listening to the problems of Bhopal Gas Tragedy victims, during a protest at Jantar Mantar in New Delhi on April 14, 2006. Survivors of the Bhopal gas leak disaster have threatened to go on an indefinite hunger strike unless the Indian Government forces U.S. chemical major, Dow Chemical Company, to pay for the cleanup of thousands of tons of toxic waste that were dumped at the site of the world's worst industrial disaster 22 years ago. The leak of lethal methyl isocyanate gas from a pesticide plant killed at least 10,000 people and affected some 550,000 others in the central Indian city of Bhopal in December 1984. Photo: Shanker Chakravarty