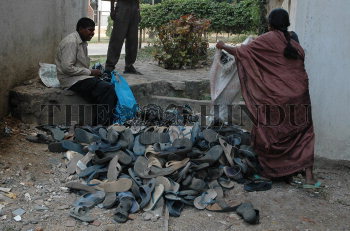 Caption : Workers collecting scattered footwears and cleaning stadium on April 14, 2006 morning, when angry crowd comprising fans and anti-social elements used these to throw on Police personnel during the violence that broke out when Dr. Rajkumar's dead body was kept for public view at Kanteerava Stadium in Bangalore. Photo: G.P. Sampath Kumar