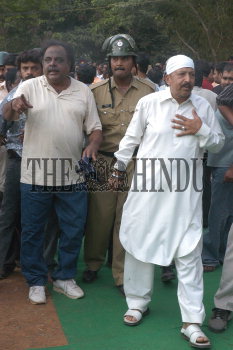 Caption : Kannada film stars Vishnuvardhan (right) and Ambarish trying to control the violent fans of Dr. Rajkumar at his funeral at Kanteerava Studios in Bangalore on April 13, 2006. Thousands of fans who thronged the studio to have a last glimpse of the actor turned violent as proper arrangements were not made there. Dr. Rajkumar passed away in Bangalore on April 12. His death triggered violence in the city. Hundreds of fans took to the streets in many areas and started throwing stones and bottles at buildings and passing vehicles. Incidents of arson were also reported from many areas. Photo: V. Sreenivasa Murthy