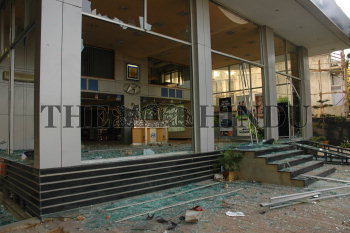 Caption : A Hyundai showroom on Bellary Road was attacked by the unruly mob, following the death of Kannada actor Dr. Rajkumar, in Bangalore on April 12, 2006. New vehicles inside were damaged, in Bangalore April 13, 2006. Many such car show rooms around the city were also ransacked. Photo: K. Murali Kumar