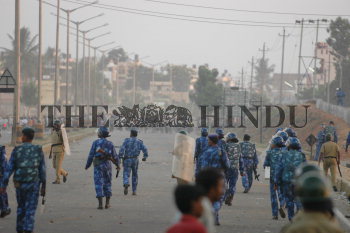 Caption : The Rapid Action Force (RAF) personnel were pressed into action to quell the unruly mobs that went berserk, during Dr. Rajkumar's funeral procession. The police forces and the mobs often fought pitched battles. Scores of private vehicles and property were set on fire and destroyed, in Bangalore April 13, 2006. Photo: K. Murali Kumar