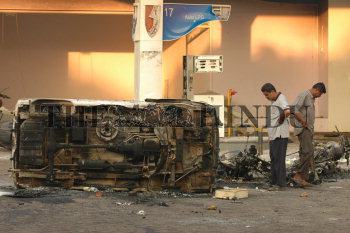 Caption : A Bharat Petroleum bunk which was attacked and torched by actor Rajkumar's violent fans at Nandini Layout - Outer Ring Road junction in Bangalore on April 13, 2006. Three vehcles inside the bunk were also destroyed. Dr. Rajkumar passed away in Bangalore on April 12. His funeral is to take place at Kanteerava Studios on April 13. His death triggered violence in the city. Hundreds of fans took to the streets in many areas and started throwing stones and bottles at buildings and passing vehicles. Police forces and mobs fought pitched battles in many areas. Incidents of arson were also reported. Photo: K. Murali Kumar