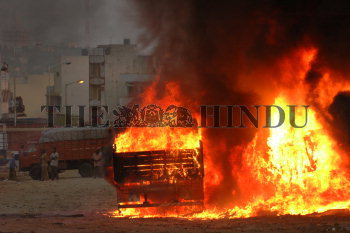 Caption : Mob frenzy turned APMC Yard in Yesvantpur into an inferno like many other places in Bangalore. Many lorries loaded with goods were set on fire by actor Rajkumar's violent fans at the yard on April 13, 2006. Dr. Rajkumar passed away in Bangalore on April 12. His funeral is to take place at Kanteerava Studios on April 13. His death triggered violence in the city. Hundreds of fans took to the streets in many areas and started throwing stones and bottles at buildings and passing vehicles. Police forces and mobs fought pitched battles in many areas. Incidents of arson were also reported. Photo: K. Murali Kumar