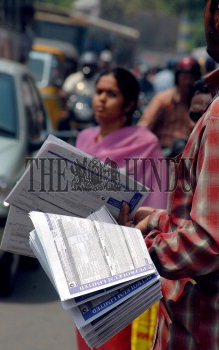 Caption : Notwithstanding the sharp correction in the stock market indices, there has been a huge demand for the application forms of Reliance Petroleum's IPO, which opened on April 13, 2006, which is reported to be several times oversubscribed. At a street corner in Hyderabad the application forms are distributed to meet the increasing demand. Photo: Mohammed Yousuf