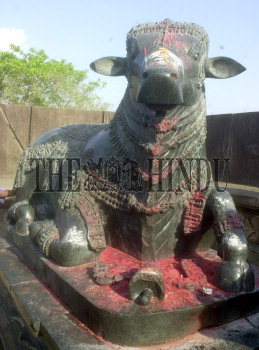 Caption : The Ramalingeswara Temple popularly known as Ramappa Temple is located in Palampet of Warangal district. The temple built in the 13th century A.D. by king Kakati Ganapathi Deva of the Kakatiya dynasty is described as the "brightest star in the galaxy of medieval temples in the Deccan." Maha Shiva Ratri is celebrated for three days here. The SHIVALINGAM in the sanctum is of 9 feet and in the opposite side at the main entrance a 9 feet Nandi is present. Photo: D. Gopalakrishnan 13/04/2006