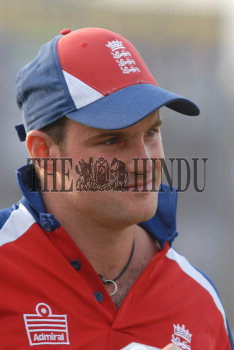 Caption : England's stand-in captain Andrew Strauss, Man of the Match, seen during the presentation ceremony of the sixth one day international cricket match between England and India at the Keenan Stadium in Jamshedpur, India, on April 12, 2006. England won the match by five wickets. Photo: V. Ganesan