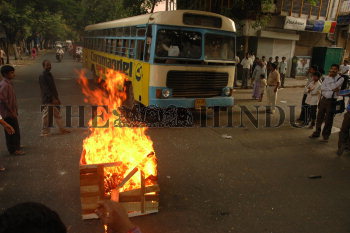 Caption : A common scene at many locales in Bangalore, after the death news of Kannada film star Rajkumar was flashed in TV Channels, Buses were burnt, stones were thrown damaging several vehicles, even shops and business establishments were forced to close down by the fans, in Bangalore on April 12, 2006. A photo taken at Malleswaram. Photo: K. Murali Kumar