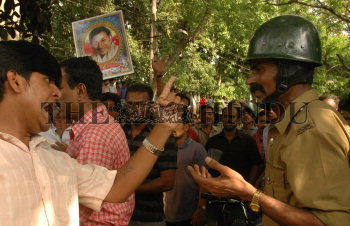 Caption : Fans gathered before Dr. Rajkumar's house to pay their last respects, seen exchanging words with police official when they were stopped outside, after the death news of Kannada film star was flashed in TV Channels, Buses were burnt, stones were thrown damaging several vehicles, even shops and Business establishments were forced to close donw by the fans, in Bangalore on April 12, 2006. Photo: K. Murali Kumar