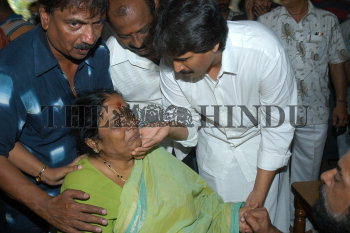 Caption : Congress MLA Kumar Bangarappa consoling Parvathamma Rajkumar, wife of veteran Kannada actor Dr. Rajkumar who passed away in Bangalore on April 12, 2006. The 77-year-old doyen of Kannada cinema and citizen extraordinaire of Karnataka, died at a hospital in Bangalore following cardiac arrest. He was a role model and a father figure of the Kannada youth, who called him "Annavaru". He is survived by wife Parvathamma, two daughters and three film star sons, Shivaraj, Raghavendra and Puneeth. Photo: V. Sreenivasa Murthy