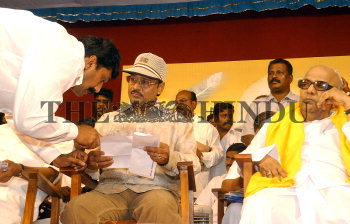 Caption : D. NAPOLEAN, DMK candidate for Mylapore constituency, is having a word with K. Bhagyaraj, film director and actor, at a public meeting in Adyar, Chennai on April 11, 2006, during the party's election campaign for the coming Assembly elections. M. Karunanidhi, president of the DMK party is at right. Tamil Nadu Assembly elections are slated for May 08, 2006. Photo: N. Sridharan