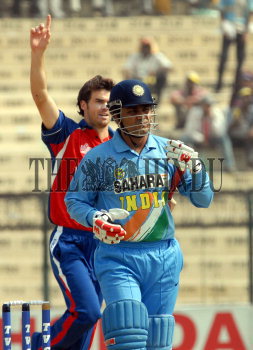 Caption : India's stand-in captain Virender Sehwag departs after being caught by Vikram Solanki (not in pic) off the bowling of James Anderson in the sixth one day international cricket match between England and India at the Keenan Stadium in Jamshedpur, India, on April 12, 2006. Photo: V. Ganesan