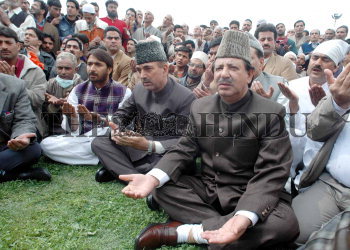 Caption : Chief Minister of Jammu and Kashmiri Gulam Nabi Azad with Haj Aqaf Minister PEERZADA Syed busy praying, as the head priest (unseen), displays the holy relic of Prophet Mohammed, to mark the birth anniversary of the Prophet, at Hazratbal Shrine, in Srinagar, on April 11, 2006. Thousands of Kashmiri Muslims gathered at the Hazratbal shrine, which houses a relic, believed to be a hair from the beard of the Prophet, to offer prayers on his birth anniversary Photo: Nissar Ahmad.