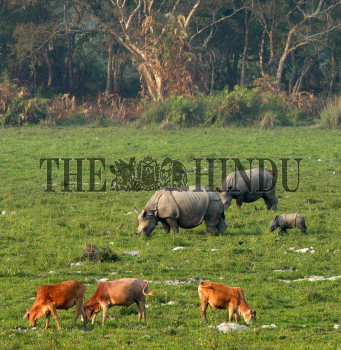 Caption : A pair of one-horned rhinos and domestic cattle graze side by side in the Kaziranga National Park in Assam on April 11, 2006. Wild animals often have to compete with livestock to sustain themselves even within protected areas. Such proximity may also lead to the spread of disease from cattle to wild species. Kaziranga has about 1,800 one-horned rhinos, which constitutes nearly 70 per cent of the world population of the endangered animal. Photo: Ritu Raj Konwar