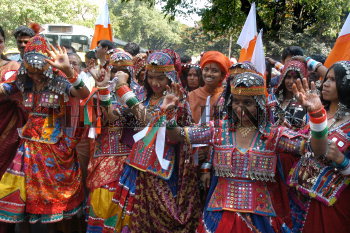 Caption : Karnataka Pradesh Banjara (lambani) Seva Sangha, organised a State level seminar and Kalamela at State Youth Centre in Bangalore. A dance performance of some of the participants in the lambani dress on April 11, 2006. Photo: K. Gopinathan