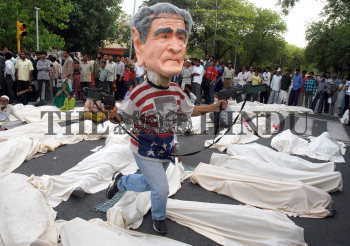 Caption : Bhopal gas victims holding a demonstration by disrupting traffic at Parliament Street, in New Delhi, on April 10, 2006. Over 400 survivors of the Bhopal gas disaster and their sympathisers, organised a huge 'die in' here, covering themselves in white shrouds and lying on the road while symbolic figures of death danced through the 'corpses'. One of the activists dressed as George Bush is seen dancing around. Photo: S. Subramanium