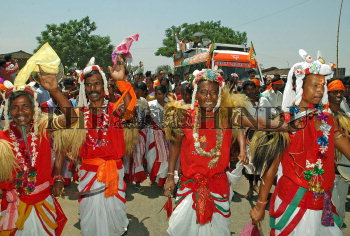 Caption : Tribal folk artistes dancing in front of ‘Bharat Suraksha Yatra’, taken out by Bhartiya Janata Party president Rajnath Singh, at the border of Chhattisgarh and Jharkhand in Gumla district on April 10, 2006. The journey of the BJP president which began from Bhubaneshwar entered Jharkhand on the fifth day of its course. Photo: Akhilesh Kumar