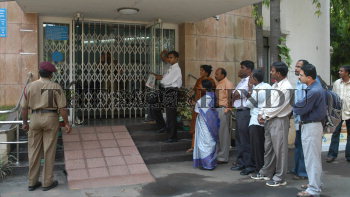 AS SBI EMPLOYEES AND OFFICERS CALLED OFF THEIR STR

Caption : The much relieved customers are back to the State Bank of India (SBI) at St Marks Road branch, in Bangalore, on April 10, 2006, even before the bank is to open, after the end of a week-long strike that has been called off. Photo: K. Gopinathan