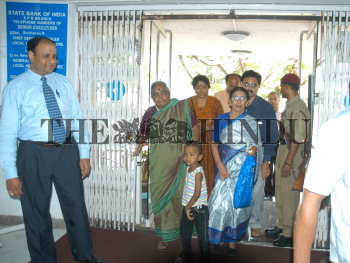 AS SBI EMPLOYEES AND OFFICERS CALLED OFF THEIR STR

Caption : The much relieved customers are back to the State Bank of India (SBI) after the end of a week-long strike that has been called off and the bank is back in action in Bangalore, on April 10, 2006. Photo: K. Gopinathan