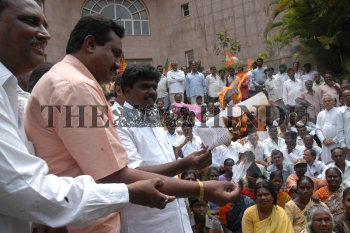 BJP CORPORATORS AND LEADERS ALONG WITH THEIR SUPPO

Caption : BJP Corporators and leaders along with their supporters staging a protest before Bangalore Mahanagara Palike (BMP) head office, against the recent budget. Later they burnt the copies of budget, in Bangalore, on April 10, 2006. Photo: K. Gopinathan