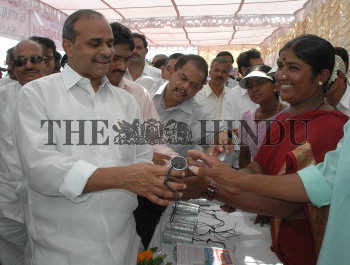 Caption : The Chief Minister Y. S. Rajasekhara Reddy is impressed by the work of SHG women manufacturing capacitors for regulation of the free-power in Navalga village in Basheerabad Mandal of Ranga Reddy District where he launched the 'Prajapatham'. SHG beneficiaries told the Chief Minister that they had also learnt the electrician's trade. Photo: P. V. Sivakumar