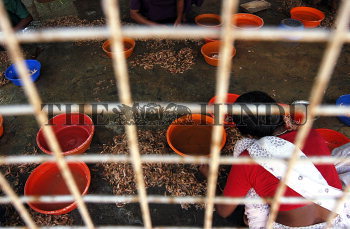 Caption : Workers engaged a shrimp peeling unit in Kochi. Total demand for fish and fishery products will go up by 50 million tonnes by 2015 from 133 million tonnes in 2001, implying an annual growth of 2.1 per cent and as a result, the fish production will face a decline from the annual rate of 2.7 per cent of the past decade to 2.1 per cent per year between 2001 and 2010,state studies by Food and Agricultural Organisation (FAO). Photo: K.K. Mustafah 9/4/2006