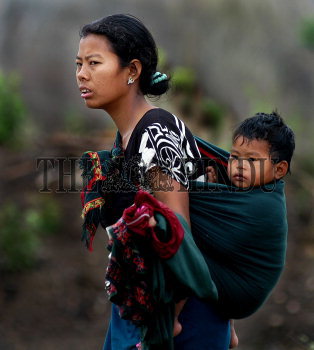 Caption : A Dimasa tribal woman with her little boy on her way to her relief camp in Diphu, Karbi Anglong district of Assam over the weekend. There are more than 75,000 homeless riot victim people living in different relief camps since last six months in the Assam’s largest Karbi Anglong district who are going to cast their votes for peace on April 10, 2006. More than sixteen insurgent groups are presently active in Karbi Anglong, which will be a tough task for the Election Commission to hold election peacefully. Photo: Ritu Raj Konwar 09/04/2006