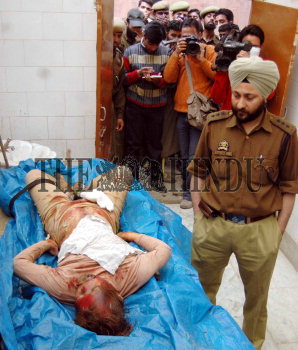 Caption : Police officer standing near the body of a missing woman tourist from Taiwan after she was fished out from the Dal Lake in Srinagar on April 08, 2006. HUANG Sui Chin, 52, a Chinese passport holder, was missing since March 22, 2006 when she failed to return from a sightseeing trip. Photo: Nissar Ahmad