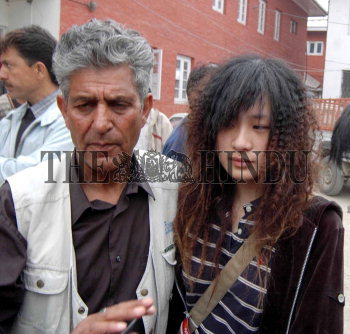 Caption : Lio Tsai Lin, daughter of Taiwanese tourist HUANG Su-Chin, after she identified the body of her mother in a police morgue in Srinagar on April 08, 2006. Police recovered a body from a lake on April 08, 2006 and said it had been identified as a Taiwanese tourist, missing for over a fortnight. The 52-year-old visitor went missing on March 22, 2006 after she checked into a houseboat in Kashmir's famous Dal Lake and left for an internet cafe. Photo: Nissar Ahmad