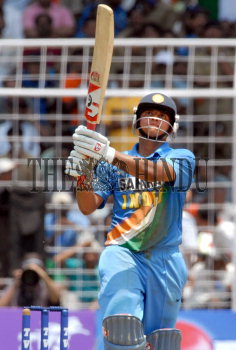 Caption : Indian batsman Suresh Raina watches the ball after hitting a delivery from England bowler Sajid Mahmood (not in pic) for a six during the third one day international cricket match between England and India at the Jawaharlal Nehru Stadium in Margao, Goa, on April 03, 2006. Photo: V. Ganesan