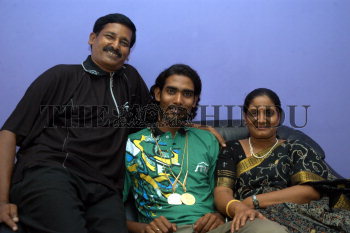 Caption : Indian table tennis player A. Sharath Kamal, who won the men's singles gold medal in the Commonwealth Games 2006 at Melbourne, Australia, with his father A. Srinivasa Rao (left) and mother A. Annapoorna, at his residence in Chennai. He also won the table tennis team event gold medal at the Commonwealth Games. Photo: Vino Johan (02-04-2006)