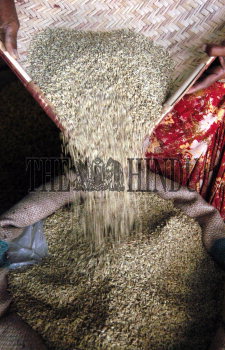 Caption : Coverage of cumin cultivation has increased nearly one and half times owing to good climatic conditions in the country. With Rajasthan and Gujarat being major players in cumin producing sector, current production from Gujarat stands at 1.54 lakh tonnes and one lakh tonnes from Rajasthan. Current export during April - September 2005 stood at 4,300 tonnes. Photo: K.K. Mustafah 30/03/2006