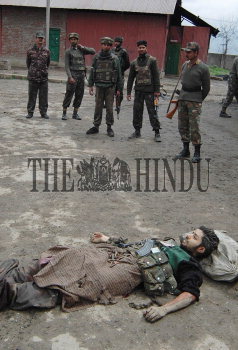 Caption : Army soldiers looking at the body of a militant lying on the ground at an army camp killed during the attack at Pampore on March 26, 2006. Officilas said that one soldier was killed and six other soldiers were injured when the convoy in which they were travelling was ambushed by the militants and one of the attackers was killed in retaliation. Photo: Nissar Ahmad