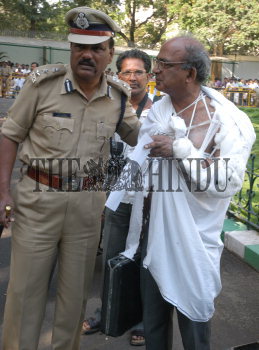 Caption : Janata Dharshan, Karnataka Chief Minister H.D. Kumaraswamy's move to reach out to the grieved public, has gained popularity and the queue is increasing in every dharshan in Bangalore. A police official consoles Prof. Bijoor, ex-Vice President of Indian Society for Training and Development, Director of Ambedkar Institute of Management, (who was allegedly MANHANDLEd by a police official in January 2006 and his camera was smashed) on March 25, 2006. Photo: K. Gopinathan