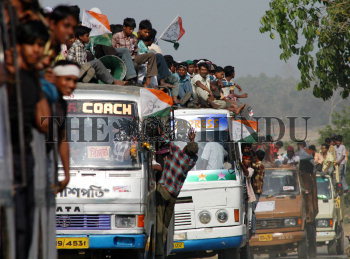 Caption : Supporters packed in buses are on their way to support their candidate during the filing of the nomination paper for the second phase of Assam State Assembly election in Goalpar, Lower Assam on March 24, 2006. According to the Election Commission’s guide, one candidate can use only four vehicles for election campaigning, but many candidates have used more than that as seen in this picture. With the election nearing, campaigning is going on in full swing throughout the State. Photo: Ritu Raj Konwar